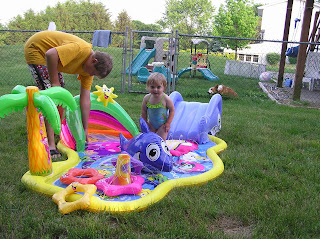 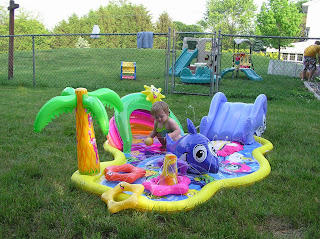 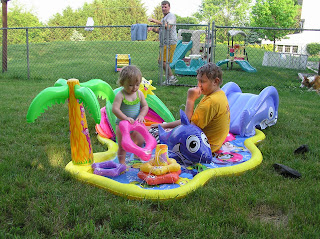 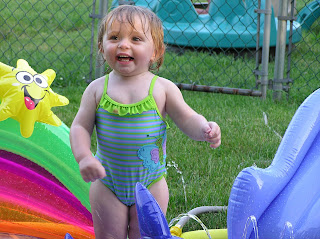 . . . . It looks like we are going to be having a miserably hot summer. I mean, seriously, it's the first weekend of June and they are already talking about our first heatwave. We normally don't even get near the 90s til sometime in July. But since I'm pregnant, I guess we will have to have an obnoxiously hot summer. I was pregnant and had Zac in the worst winter here in PA. The most snow we ever had. The winter I had Cassidy was pretty mild, except 2 days before she was born when we had a terrible snow/ice storm, luckily most of the roads were cleared by the time we headed to the hospital.

So in preparation for the weather, we decided to go look for a kiddie pool for Cassidy. Well we found this cute play area that sprinkles water, there's one spot that gets a bit deeper (probably 2-3 inches) with a little cabana shelter, it has a shark to ride, an elephant slide, palm tree, and a cone with starfish to stack. It stays hooked up to the hose so the water continues to sprinkle.

Well, as everyone knows, water from the hose is cold. We set it up and took her outside, thinking she'd run for the hills, because we hadn't let the water warm up. No way, she was all for it. In the beginning, she was a bit timid, but then she must have gotten used to the water and started having a blast. Zac came out and splashed around with her. Cassidy bumped into him and gave him a bloody nose, with Zac it doesn't take much.

I'll probably regret not getting something deeper that I could at least put my feet in to cool off, but after watching her the two of them goofing off for about 40 minutes, I'll survive.
Posted by Dani

i LOVE that!!! where did you get it? this summer is crazy hot already on our side of the state. ugh!!!

HEy DAni:) So good to hear from you and the kids. What is the new babies name? How far are you all from Pittsburgh? I live a half hour from there now. Keep in touch and I pray all is well.

Glad to hear things are going well! Cassidy is a little doll! We are in the Championship game for Softball tonight. Boy am I glad its over! I am tired of sitting in a camping chair sweating my tail off!! At least they gave me something to smile about loL!

How fun is that!? Where on earth did you get playyard, I love it!