I have been given an award by MaryBeth over at Because I Said So. I recommend checking out her blog, she has a way with words.

It is the Honest Scrap award, sorry, but I can't help but wondering if it should be Honest Crap award? The recipient of this award to list 10 honest things about themselves -- make it interesting, even if you have to dig deep. Pay attention because at the end of my 10 things, I'll be awarding the "Honest Scrap" award to seven lucky friends.

1) It was made abundantly clear that we frequent McDs too much for two reasons 1) Cassidy was in her car seat, talking to her window . . . or should I say "placing an order" to her window, she was saying "chicken nuggets and french fries". Also when we see the golden arches she starts saying in a deep voice "CHICKEN NUGGETS".

2) I have always disliked my name "Danielle". When I was growing up it was a very odd name. I still have never met anyone that is older than me with my name. I spent many years in grade school correcting teachers on the first day of school that it wasn't "DANIEL". But I do love Dani, probably because I am and always have been a tomboy. Teachers used to confuse me and a boy in school, his name was Blaine. I always kept my hair short and despised girly clothes.

3) Even tho I love our darling little pup Corki, in hindsight, she was a BAD decision made in grief. When we found out her mom died after delivery her litter and the breeder offered us a pup, we should have thought about it longer. Training a pup and raising a toddler does not mix, plus after agreeing to take a pup we found out another little surprise was on the way. It is 100% my (and Chuck's) fault that she is a chewer, we never trained her properly.

4) I drink WAY WAY WAY too much Diet Coke. And for whatever reason, I prefer it from the fountain, so usually at least once a day one of us is making a "soda" run. Of course, while I will drink gallons of soda in a week; I have a cow if any passes Cassidy's lips. As a friend mentioned last week, if we mom's followed the "toddler diet" we be much fitter. Because we never let them eat the junk we do.

5) I don't wear jewelry. I don't even wear my engagement/wedding rings. I have holes in my ears which only get filled on the rare occasion. The only thing I wear regularly is a necklace. I have a necklace my father made for me when I was about 10, he made silver jewelry and it's my name "DANI" that hangs vertically. Amazing I never lost it. I did give it to my first boyfriend and after we broke up, I had to steal it back, so I learned to never give it to anyone ever again.

6) My favorite parts of the day include getting the peanuts dressed, for whatever reason, I totally enjoy picking out their clothes for their day. Of course, at that point, they are clean, stain-free, dry because they haven't drooled or spit up yet.

7) I am addicted to finding bargains on kids items. Yard sales, craigslist, e-bay, consignment sales and I LOVE LOVE LOVE and appreciate hand-me downs. I'm looking forward to spring and the start of yard saling season.

8) I get cabin fever, easily. After 15 years of being a SAHM, I have realized I need to get out of the house a couple times a week to stay sane and so the rest of the family can stand to be in the same room with me. Whether it's a trip to CVS, visiting family, or one of Zac's sporting events, it does the trick.

9) My kitchen theme is CHICKENS! LOL The wallpaper is . . . . wait for it . . . chicken wire! I don't have much wall in my kitchen so it's mainly the soffet above the cabinets and one wall. I have an open kitchen/dining room. I have a cast iron rooster bell, a chicken swag on the soffet and one above my stove. I have a chicken recipe box, bookends, statues and other knickknacks on my counter. It's been about 5 years now and I still like it, so that's a good thing.

10) I am an insomniac. It takes me on a good night, at least 20 minutes to fall asleep. I have always been like this. My way to deal with it is that I will lie in bed, eyes closed and "daydream". For years those dreams would be that I was pregnant or we had another child. Well, since that dream finally came true, I now think about what my dream house would be . . . or that Jon Bon Jovi moves in next door.

I hope you learned a little about me.

So now I pass this on to Seven Friends:

I hope I didn't hit anyone up that has already received this award, I tried to check. 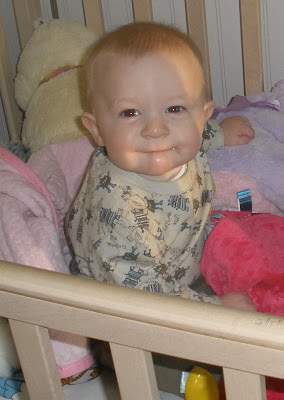 I watched the inauguration the other day as Cassidy dumped every mega block, peek a boo block, and every toy in Jaxon's bin on the floor.  It gave me a feeling of hope.  Don't get me wrong, I don't think everything is going to be magically "fixed"; I am not expecting a miracle.   But one thing I have learned  from my Mommy friends who live outside of the U.S.: the world already has a more positive perception of the U.S.   One comment sticks in my head "the rest of us look to America to lead the way."
While we've had many wonderful blessings over the last eight years, it's not easy to forget the jobs that Chuck has lost due to outsourcing outside of the U.S.  and the sense of uncertainty that comes from that. Then there was my typing job, which basically dwindled to next to nothing, and they only wanted me to do weekend work, so it was no longer worth it.  Guess who's doing that typing now?  Yup, someone over in India.  It is actually cheaper for them to send it there to get typed, come back here to be edited, and send it back to be finalized.   Now, I certainly wasn't making mega bucks from this typing job . . . the basic rate was 40 cents per 1000 keystrokes, with an average page being about 2,500 keystrokes -- so $1.20 a page.  It was an interesting job, and most weeks paid for our groceries.
The job Chuck currently holds is the first job he lost, ironic.  But he's now a contractor, working for an outsourcing company.  Ninety percent of the support staff that he works with are in India. It is the way of the IT world.   It always seems like you are waiting for that other shoe to drop.
All in all we have rode out those waves and are better for.  We've realized that a dip in salary is worth it, because Chuck gets to work from home twice a week.  He is gets to see so much more of the peanuts this time around, and realizes why some days I get NOTHING done.   He is a valued resource at his job, and that's great, he was given a great raise this year . . .  but in the end, if the hammer falls, often times it doesn't matter if you are the best employee in the world, the decisions are not made by anyone who even knows your name.
So yeah, I'm a sappy optimist who is looking forward some positive changes ahead, no matter how small.  If nothing else, I know we will get a small increase in income at least once this year if not twice . . . when Jax comes off formula that will give us another $60 or so a month, AND if we get our stubborn little girl to use the potty that will be an increase of about $40 a month. LOL Hey,  it's something to look forward to, right!
Posted by Dani 1 comments 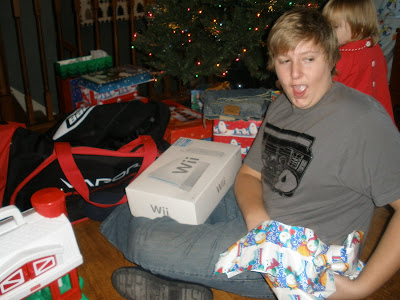 I forgot to post this picture with the Christmas shots. This is Zac getting his Wii. As you can see he was very happy. Of course, as goes our life, it worked for two weeks and died. Thankfully, Best Buy refunded our money, but they were out of stock. Also the Wii ate a game and we were unale to retrieve it, so we did lose out on that. I am happy to report tho, that Zac was only without a Wii for a few days, when Walmart got them in stock. He called every store within a 20 mile radius, every day when he got home from school to see if anyone had them. 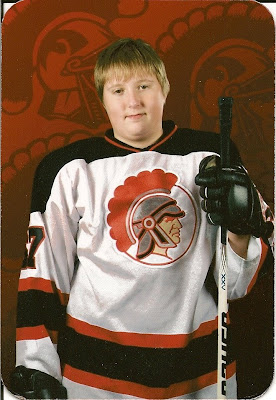 Here is my Junior Varsity hockey player. I need to find some pictures of him when he first started playing and scan them in. He's grown so much, he's taller than me now and his feet are HUGE!

And last, but not least, Zac brought home a certificate from his technical school today as he was selected as student of the month. Both the tech school and his home school make mention of this, so he was excited. I truly hope he can stay on this engineering course, he'll be able to earn quite a few college credits and even attend college a couple days a week as a high school senior. I have given him an incentive, I put it in his head that if he does stay on this course he would have to have a vehicle to be able to drive to the college, because school does not provide transportation back and forth between college and high school. Hey, whatever works, right!
Posted by Dani 2 comments 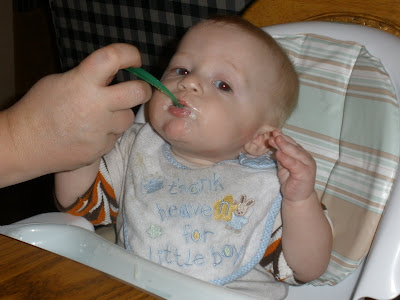 Well our big guy started cereal.  I was going to wait a while longer because he didn't show much interest, but all of a sudden when he saw us eating he would get fussy and start drooling.  Now, he's a big puddle of drool most of the time, I swear!  I am seriously trying to figure out which is worse . . . a baby that spits up, or one that drools the entire time he is vertical.   The drooly baby certainly goes through more bibs than my spitter-uppers ever did, AND he needs one on all the time, not just when eating, so it covers up his cute outfits. 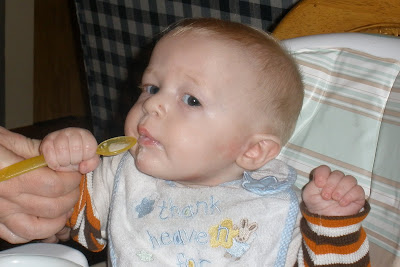 As you can see by the "GRABBINESS" he already wants to feed himself.  So we start each meal with two spoons, one for him and one for us.  And he does does pretty darn good too.  He's far less messy than Cassidy!  LOL
So far we have only done oatmeal (more nutritional value than rice cereal in my opinion, and mine's the only one that counts!)
I did buy some squash this week, but I'm holding off, I'm not looking forward to even stinkier diapers. 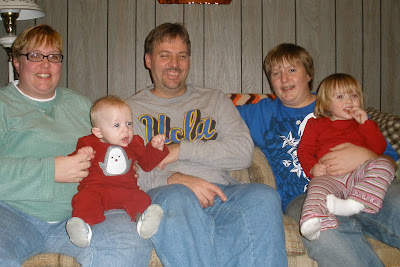 Here we are, this was Christmas night at my parents' house 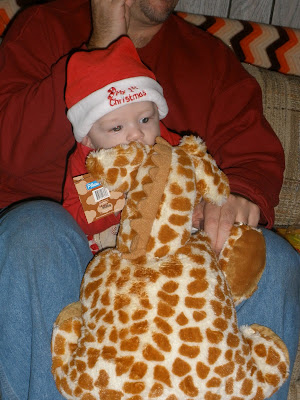 Here is Jax and his new giraffe, apparently, it's quite yummy.  It's so soft and opens up into a pillow.  I want one! 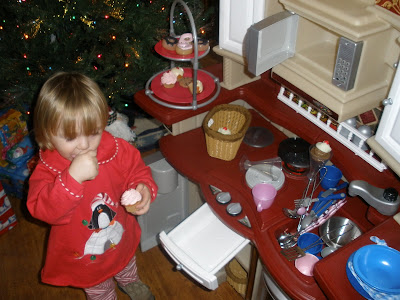 Here is Cassidy, tasting some of her cupcake.  Her new kitchen was the BEST Christmas present.  She loves it and plays with it every day, she loves to bring everybody something to eat. 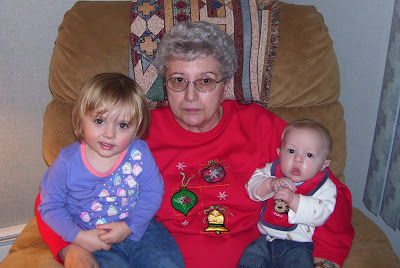 Cassidy, Jaxon, and Grandma (my mom)  She's not really grumpy, but it was the only picture where both kids were looking at the camera.  Doesn't it always work that way, you get the kids looking like you want, but whatever adult is in the picture didn't cooperate!  Go figure.
HAPPY NEW YEAR!!  May 2009 bring you lots of love and laughter!!
And yes I know I have to update my header, the holidays are over, maybe one day when Jax decides that he needs more than a 15 minute nap I'll get to it.
Posted by Dani 3 comments