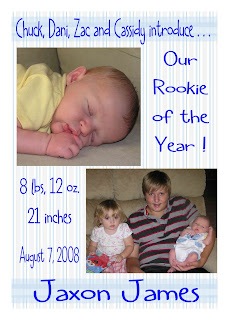 Our birth announcement, I made it using my scrapbooking program and printed them through Winkflash -- I usually use Shutterfly, but I found Winkflash and they are quite a bit cheaper for prints. 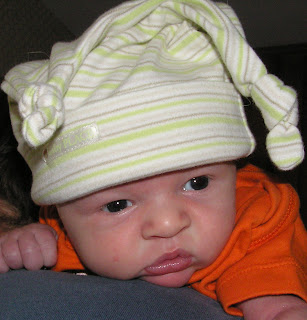 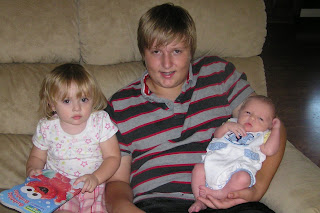 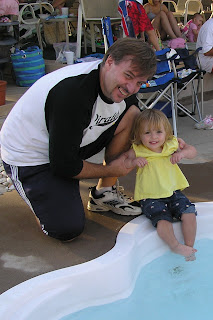 Even tho she's grinning here, she was not HAPPY that all we let her do at the pool was dip her feet. I can't swim for a few more weeks and Zac was off with the teenagers and Daddy had no intentions of getting in the pool, so poor CJ was not amused!!


So, the other day I made a comment that "The beauty of being the parent is that even if your child doesn't LIKE something, you know what's best!" Now, this was said about toddlers and bibs, and I know Cassidy would prefer to be bib-free, but seriously, who enjoys pre-treating every piece of laundry you throw in the wash, NO WAY. She wears a bib, unless it's a mess-free meal -- nuggets and fries (no ketchup!).

Anyway, here we are over two weeks since Jaxon has entered the picture and when I tried to swaddle him a couple times, he was NOT a happy camper (no surprise, Cassidy hated it too). Saturday was a rough night, he was up every 90 minutes, not hungry just fussy. So last night when he got up 30 mins after Chuck gave him a bottle I thought PHOOOOOOEY on this, I'm swaddling you. He basically slept through me swaddling him and settled immediately. I put him back in his crib before 2 a.m. and he slept til almost 5 a.m. WOOHOOO . . . . Chuck gave him a bottle and put him back to bed at 5:20 and he slept til 8:40 . . . . SO WHY!!! did it take me so long to remember how well swaddling worked with Cassidy. I know we have a ways to go til we get through the night, and that's OK, we expect that. But right now 3 hours of sleep sounds like HEAVEN.

There are plenty of things kids don't like, but we make them do it anyway, from swaddling, to bibs, to bike helmets and booster seats. . . . and since I'm the parent all I need to say is "BECAUSE I SAID SO!" hehehehe
Posted by Dani 3 comments 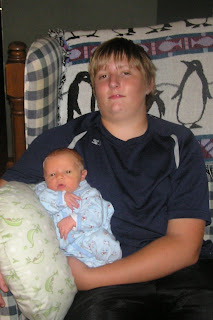 Zac and Jax, hanging out on the sofa. Zac loves to hold him, but it always takes him a bit to get comfortable. He needs a pillow under his arm. He also likes to lay on the sofa, with Jax sleeping between his legs. 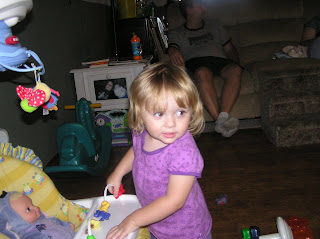 Cassidy has her baby in the swing. 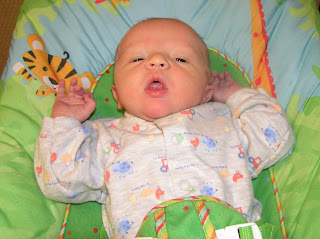 Jax's favorite place is in the bouncer. He takes his longest naps in there, so much so that at night we put the bouncer in his crib and he sleeps in that. I don't know how much of a bad habit this is going to be, but for now, he's happy and content and will sleep over 3 hrs in it, so it works for us!!!

Jaxon did have a follow-up with the pediatrician earlier this week to check on his jaundice. He got his heel pricked and the little bugger slept through the whole thing (better than he had slept the night before!). The bilirubin levels came back normal, so that was the end of the that.

While at the peds, they went to weigh him. After getting him naked, but the diaper, Chuck put him on the scale. I was sitting in the corner and saw Chuck shaking his head and looking at me. He mouths over to me "That can't be right" and the nurse says -- "Five pounds, three ounces" and I go, wait a minute. We left the hospital yesterday and he weighed 8 lbs, 6 oz. So she says batteries must be going, I'll get another scale, so Chuck picks Jaxon up as the nurse goes to the next room to get a scale. She comes back in the room just in time to hear Chuck going, "WOOOAH" as I look over and see Jaxon peeing all over Chuck (LMAO!!) and then heard a little splush as he poops on the floor. We all had a good laugh over that. Jaxon put on quite a show. And with a scale in working order, Jaxon weighed in at 8 lbs, 7 oz.

He is doing well and we are settling into a bit of a routine, but I'm spoiled right now because Chuck's been home. It'll be a bit more intimidating when next week rolls around and he goes back to work for a few days. At least I have another few weeks with Zac to help. For the most part Jaxon is a pretty content little guy, but he has no tolerance for diaper changes!!! And when he's hungry, we have about 60 seconds to get him a bottle. Luckily, just like his big brother and sister, he likes his formula right out of the fridge, so we keep bottles at the ready.

AND so far, he doesn't spit up . . . this is NOT at all like his siblings. I have a stash of burp clothes tho, just in case.
Posted by Dani 3 comments 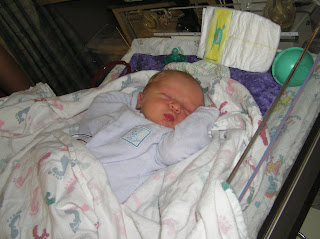 Jaxon in the NICU

Thursday, August 7, 2008 at 2:18 p.m. Jaxon James was born. He came into the world screaming his head off, and according to his daddy and his baby nurse there is no need for a baby monitor for this little guy and his healthy lungs!!! He had great apgar scores (8 & 9) but as he was being taken up to the nursery he started breathing fast. His respiration would vary between normal and fast most of the day and because of this, he was kept in the nursery and not allowed to come to the room with us. At about 9 pm they decided to send him to the NICU to be monitored.

At 5 a.m. the next morning I was told I could go visit Jax, so I headed over and finally got to hold him. For the most part he did pretty well over night with only a couple episodes of fast respiration. He was kept in the NICU til about 3 pm when he was finally allowed to come hang out in our room. 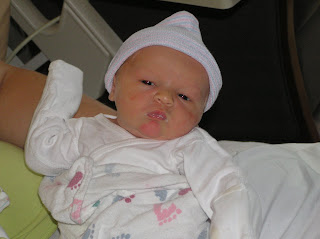 He was doing great, with no other signs of distress and spent that night in the regular nursery. He did have two episodes of fast resps, but he calmed down pretty quick and the peds felt it was just transitional from birth. Of course, he was given a few tests along the way because a heart murmur was also detected, so he had an ultrasound and an echo, which showed a tiny hole between his ventricles. The peds assured us that this had nothing to do with his breathing and was basically a non-issue. The hole would most likely repair itself, but even if it didn't it was so tiny that it wouldn't be an issue as Jaxon grows. We will follow up with a pediatric cardiologist in a few months just to make sure. 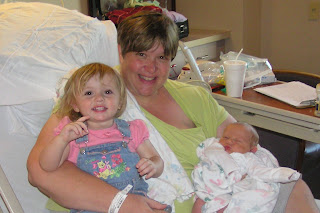 Big sister, Cassidy, is not all that impressed with her new baby brother. She wanted MOMMY!! She does say "baby" and will lay her head near him and saw "Awwww", but other than that, she doesn't bother. Although she is very much interested in the bouncy seat and swing, and likes putting stuffed animals in them. 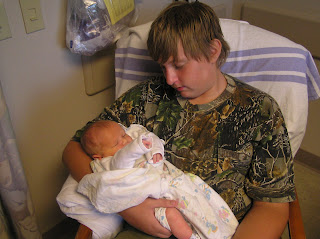 Zac is enjoying his new "Bro". He's been a big help, whether it's getting things or keeping his little sister entertained. 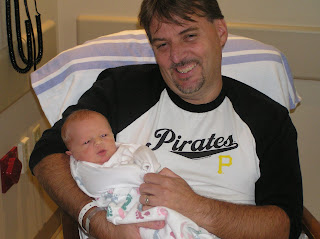 Proud daddy, is hoping maybe this little guy will be a fan of one of his teams, although between the Pirates and the Dolphins, those are some slim pickings! We were informed that Jaxon shares his birthday with Sidney Crosby, so I'm thinking that means he'll be a Pens fan! 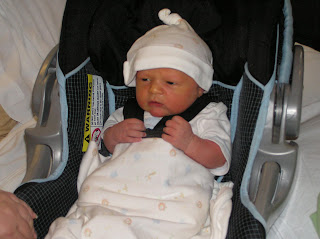 We are happy to be home and getting settled in. Cassidy is thrilled Mommy is home. Tomorrow we have to take Jax to the lab and get his heel pricked because he appears a bit jaundice, EVEN THO his blood levels are in the normal range, they just want to keep a close eye on that. After a couple days of sleepiness in the hospital, now that we are home he's eating every two hours (instead of the 3-4 at the hospital).
Posted by Dani 6 comments