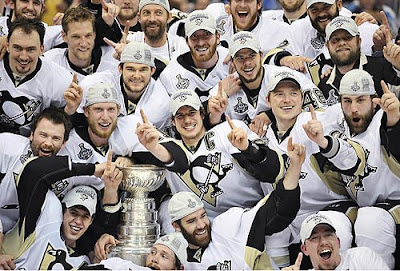 Anyone who really knows me, knows I'm a hockey nut. I'm a fan of the game as well as a fan of the Pittsburgh Penguins. I believe a fan follows their team through thick and thin and accepts when heir team struggles and still proudly wears their team's apparrel. Then there are fans (I'm related to one) who come out of the woodwork when the playoffs roll around and their team is making a run for the championship. They couldn't name the coach of the team or name players that were traded during the season, etc. but gladly jump on the coat tails of the team.
Also being a fan means accepting defeat graciously. Maybe having watched my child play sports for over 10 years make you realize that calls get screwed up, any team can beat any team on any given day -- that's why you play 9 innings, 3 periods, 4 quarters. It's not over til it's over. AND as important as skill is, luck has more to do with winning then some people would care to admit. A lucky bounce this way or that, a rebound in the right direction, etc. may make the difference in a game.
I have a handful of very close friends who like me are Penguins faithful, through thick and thin wear our Pens gear, display our team on our vehicles, even when earlier this season things looked grim and there was a coaching change. It's a long season and while I certainly didn't get to see as many games as I would have liked, I often followed the games online.
After all these years I've learned it's best to do my talking when the game is OVER and not before, and not to whine, which makes this victory so much sweeter. I know I have enjoyed my team as a gracious fan.
So with that said, Congratulations to the Pittsburgh Penguins, I am so very proud to be a fan.
Posted by Dani

congrats to your team dani