Santa Plus my Three 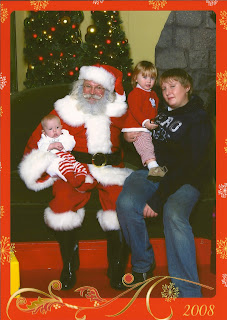 Thank Goodness for big brothers!!!
We've been chatting about Santa for a couple weeks with Cassidy, and she was all smiles and excited at the "thought" of Santa, but as many parents have found out over the years, the idea of Santa and Santa in books and on TV are all wonderfully joyful moments in a toddlers mind.

Then there is actually meeting Santa, touching Santa, and heaven forbid, sitting on Santa's lap.

As we stood in line, all smiles and talked about seeing Santa, sitting on his lap, Cassidy jibbered jabbered away, she saw him walking through the mall to his "living room", smiled and waved. She watched the family in front of us go visit Santa. The little girl (probably about 4) was giving Santa her pacifiers, she had a baggie full of them, in exchange for her Xmas presents. However, when it came time for that little boy and girl to sit on Santa's lap, they just about strangled their poor mom. Cassidy didn't seem to notice the terror in their eyes, luckily, they didn't scream or cry, just clung to their mom.

Then it was our turn, I had Jaxon, Zac had Cassidy. She was all smiles and waved to him, but at the first movement of Zac attempting to hand her off to the Jolly Old Guy, her hands wrapped around Zac's neck in a vice-like grip. We had planned for this problem and Zac happily sat next to Saint Nick and I handed Santa Jaxon. Jaxon was happy and content as he had a full belly and just woke from a short snooze.

I don't know how many teenage boys wouldn't think twice of sitting with Santa with his little sister and brother. But Zac never balked at the idea. I'm sure many teenagers would be mortified at the thought.

what a great big brother and a wonderful picture

You should be proud Mama. You've raised a wonderful boy!